Over 6,000 Volunteers to Give Up Personal Holidays to Help Mend Abaco 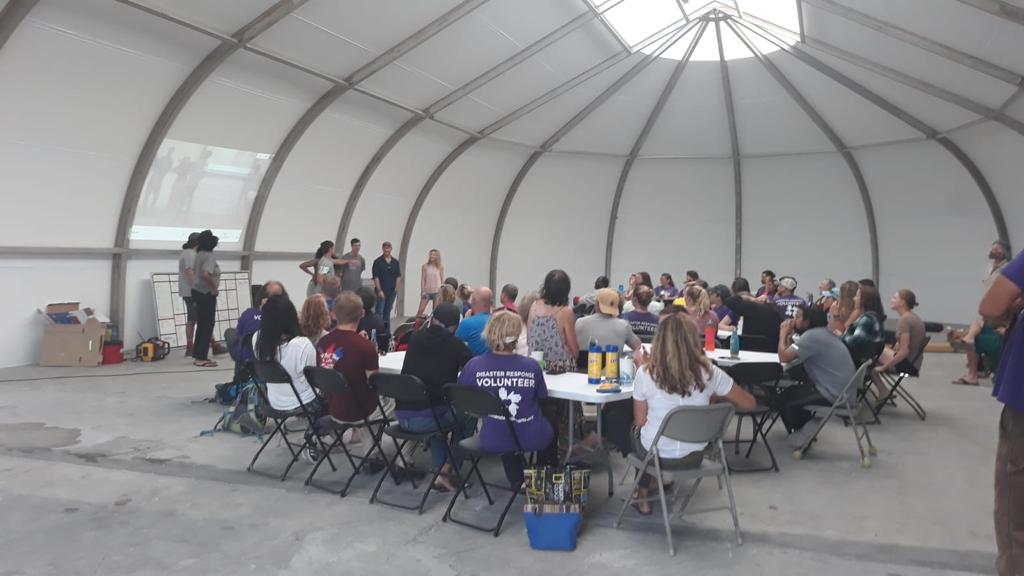 Nassau, Bahamas – According to Jess Thompson, a member of the All Hands and Hearts (AHAH) Bahamas Dart Team, over the next two years over 6,000 volunteers will use their own work holidays to help Abaco residents rebuild and recover from Hurricane Dorian. He also credits local companies like Bahamas Waste for making it happen.

Thompson, a 29-year visitor to the Abacos, was one of the first of the NGO’s volunteers on the ground after the storm, as he had knowledge of the area. “I sold my business two years ago and my wife and I joined All Hands and Hearts in the Florida Keys after Hurricane Irma. It was a logical decision to add me to the assessment (DART) team, I knew AHAH and I knew the Abacos well” explained Thompson. “AHAH focuses on delivering a smart response to those suffering from disasters both domestically and internationally. The Dart Team was tasked with finding a basecamp and preparing for incoming volunteers with safe housing, water supply, kitchen area, and sanitary needs.”

Thompson and his team were given St. Francis Catholic School as their base, located in Marsh Harbour. Once the location was realized he knew he needed latrine and large water storage. A veteran of the waste industry Thompson reached out to Francisco de Cardenas, Managing Director of Bahamas Waste – a name in the waste industry, but one he had never met.

“I just called him from Abaco, and explained I was there and what I needed,” said Thompson. “I was expecting directions on where to get stuff, what Franny said was ‘What do you need?” According to Thompson later that day the first porta-potty was delivered, by the end of the week this became three and now they are at eight units. Bahamas Waste also donated four 250 gallon totes, all arriving within days.

“It takes people like Franny to step up, despite us not knowing each other, and to help us solve what was one of the new base’s largest concerns,” Thompson added. “We are not sure how they did it but they even managed to get a staff member on the ground servicing the units daily!”

Thompson estimates that Bahamas Waste has donated in-kind over $15,000 of free services and equipment to ‘All Hands and Hearts’, allowing the team to cater to the 60 volunteers who resided there. “AHAH provides three meals a day, freshly cleaned t-shirts for workers houses them and provides shower and bathroom facilities. This donation has been priceless to help us keep going and assisting the community.”

Now five months later, Bahamas Waste is still providing the necessary sanitation equipment and water storage for the base camp which has relocated to a permanent location adjacent to Every Child Counts (ECC), a school for challenged Abaconian children. The AHAH is totally rebuilding the ECC campus and working on five other schools on Great Abaco. The basecamp is now 90 volunteers strong and their website still has over 6,000 volunteers from across America signed up to help for free until 2021.

Thompson and his wife Sharon are just back home from a second volunteer stint to help AHAH efforts, he remains amazed by these dedicated volunteers who get no pay just the reward of giving back. “I made it a point to stop in Nassau to thank Franny and the Bahamas Waste team on our most recent trip – it was like meeting family – and we couldn’t thank them enough.”